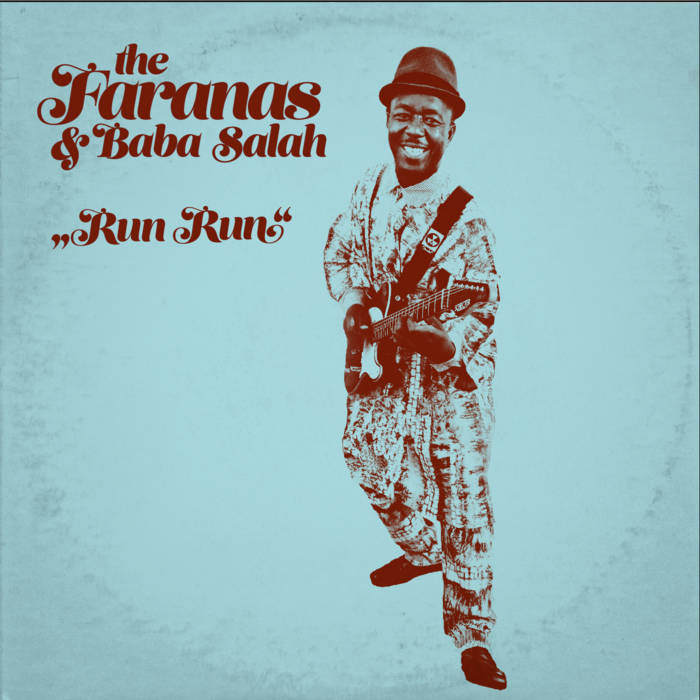 THE FARANAS & BABA SALAH
Legendary Malian guitarist, Senegalese singer and percussionist, and eight Bernese musicians mad on jazz and African rhythms disembark with their new ecstatic album. «Run Run» is a mix of traditional rhythms, modern Malian music and a good dose of afrobeat. A recording that seals the power of an up-till-now unreleased musical project that started two years ago in Ougadougou, Burkina Faso.

The vibraphonist Domink Alig first got the group together to celebrate the wonders of afrobeat in 2003. At the start it was just Fela covers, but The Faranas soon got noticed thanks to the relentless groove orchestrated by Fabian Bürgi (drums) and Toni Schiavano (long time bassist and lover of funk, hip hop and afro-brazilian music). Slamming rhythms, fiery brass section, this is big band united by a common vibration that just sees itself in training and slowly discovers its Pan-African identity.
In 2009 The Faranas are beginning to write their own compositions when they meet the Senegalese singer and percussionist Mory Samb living in Berne. He’s the son of the great singer Mbaye Ndiaye Samb and was trained at the school of religious singing since time. They enroll him as a percussionist but he soon starts singing. His incantational, griot voice, powerful and and fragile at the same time is full of his rich life experience.
The group’s first CD featuring Mory Samb, « Who Are You ? » comes out in March 2011. The press are unanimous : « The most interesting ‘World Music’ group in Switzerland at the moment.» (World Music Special/Marianne Berna). And more : « Rarely has a such a groove-based and provocative production left a Bern recording studio.» (Der Bund, Ane Hebeisen)

THE MISSING PIECE OF THE PUZZLE

Adrien Oggler, the band’s trumpeter and composer, is a big fan of western Africa. At the start of the 2000s, he embarks on numerous trips to this part of the continent, on one occasion spending over a year in Mali. In Bamako, he spends his mornings at the National Art Institute, his afternoons in the community music lessons and his evenings in the clubs. He joins in jam sessions whenever he can and meets a guitarist called Baba Salah. The two musicians become friends and keep in touch.
Originally from Gao in northern Mali, Baba Salah forged his style from the music of his origins, the takamba, plus a huge love of the electric guitar. Baba Salah is one of those musicians who likes to feel the chords burning beneath his fingers. He was part of Oumou Sangaré’s group for seven years and contributed a lot to developing the particular sound of the west African diva who was honoured at the 2011 Grammy Awards.

After the release of « Who Are You » , The Faranas look for a contact closer to Africa and decide to go on tour in Mali and Burkina Faso. Baba Salah is recruited for the occasion.
The civil war breaks out just before The Faranas are due to leave for Burkina. The Swiss- African group then set up HeadQuarters in Ouagadougou (the capital of Burkina), Baba Salah meets them there. The flash of musical lightning is immediate, Baba is clearly the missing piece in the Faranas’ puzzle. His audacious and melodious guitar slips harmoniously into all of their compostions. His rhythmic mastery multiplies the group’s power. Better still, he suggests to include in the set a traditional song « Djoreydje » (literally « Le Porte-à-porte»).

A MUTANT, URBAN AND TRADITIONAL MUSIC

In 2013 Baba Salah is in Berne. He rehearses in the group’s studio. The foundations of a new album are laid down. A new, innovative and revolutionary opus that shows all that’s possible in a new style of mutant music that’s both urban as it is traditional, not to mention African and European. « Djoreydje » fits in naturally among Mory Samb’s songs where the words speak of life lessons that promote respect, solidarity and perserverance. Baba Salah and Mory Samb now consider themselves full-time members of the band. To seal this unique alliance, The Faranas go to Berlin and Barcelona to mix the new album with Ben Abarbanel-Wolff and Jochen Ströh (Lovelite Studio), arrangers of the excellent « Love & Death » LP by the Ghanaian maestro Ebo Taylor. Thanks to them, « Run Run » follows the line ot the purist spirit of African productions of the 70s.

« Run Run », the Faranas second album, will be released on 10th of October 2014 on Everest Records.

Bandcamp Daily  your guide to the world of Bandcamp